The Sobey Wall of Honour 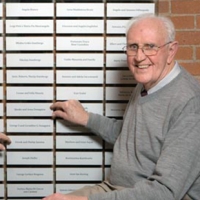 Canada is a country profoundly shaped by immigration. For some of us, our great grandparents paved the way. For others, it was a more recent story of personal sacrifice that brought them here. The Sobey Wall of Honour at the Canadian Museum of Immigration at Pier 21 pays tribute to these individuals and families who have helped build our country.

It is hard to believe that one tiny pier in Halifax, Nova Scotia, played such a big part in moulding such a big country. But it did and it still does.  As the gateway to Canada for one million immigrants, one in five Canadians can trace their roots back to Pier 21. Now, as Canada’s newest national museum, Pier 21 is entrusted to collect, share and pay tribute to the broader story of Canadian immigration from the early years of nation building to present day and become the place Canadians can explore our shared history as a nation shaped by immigration; a place where new stories can be told and shared because every day someone chooses Canada.

When you enter the Museum, you are greeted by thousands of bricks inscribed with the names of those who wished to mark their journey to Canada. This is a powerful welcome to the place that tells the stories of those who made Canada their home. Online, contributors to the Sobey Wall of Honour can add to their virtual bricks the immigration stories of the individuals honoured on our Museum walls – some, tales of hardship and sanctuary; others, of love and hope. These stories on our virtual wall allow Canadians across the country to engage with their roots and bridge gaps of distance among families. Like the names inscribed on the Sobey Wall of Honour, they are preserved in perpetuity for generations to come.

Thanks to The Sobey Foundation’s generous new gift, the Museum will be able to grow its virtual wall and expand the onsite Sobey Wall of Honour onto the second level of the Museum, and continue to honour the stories and the legacy of Canadians who came seeking a better future for themselves and their families. Together we are creating an extraordinary storybook for all Canadians that celebrates our shared history and the immeasurable contributions that newcomers make to our culture, economy and way life. The Sobey Foundation’s support of Pier 21 demonstrates a commitment to our collective heritage and the important role that this national treasure has played in the lives of Canadians and the cultural fabric of our country.

For many Canadians, Pier 21 reminds them of the first day they came to Canada. It represents the place where their immigration story began. It is a story that is marked forever on the Sobey Wall of Honour.

The application process is easy. If your project fits our criteria simply follow this link and get started.