Posted August 13, 2014 by John Brannan and reprinted from The News

The Sobey Foundation has given the health foundation the single largest gift in its history with an $8 million one-time donation.

“What an amazing gift to receive,” said Susan Malcolm, executive director of the Aberdeen Health Foundation. “It’s absolutely phenomenal. [The Sobeys] are wonderful community-minded people and they understand the importance of healthcare in the community.”

According to Malcolm, the $8 million will boost the foundation’s funding, supporting the Aberdeen Hospital and wellness programs across Pictou County.

Bernard Doucet, director of Corporate Affairs with Sobeys Inc., noted the decision by the trustees to give to the foundation is because they work and live here in Pictou County.

“They have had a relationship with the hospital and foundation, since their inception,” he said. “Supporting the community where they live and work is their priority.”

Doucet noted that by issuing this one time gift, the foundation will be enabled to make the decisions without any constraints.

“This gift is really to equip the foundation with additional means to do the best possible job it can for the hospital and the community.” 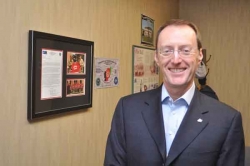 Frank Sobey is a strong supporter of medical research particularly after his own battle with prostate cancer.

Susan Green, chair of the Aberdeen Health Foundation Board said the gift will have a transformative impact on the foundation’s mandate of enhancing health care in Pictou County for generations to come.

“These funds will ensure that the Foundation can continue to support excellence in essential health care,” she said.

Malcolm said the money hasn’t been received with specific instructions to be earmarked within any particular endowment managed by the foundation. If it is placed in an endowment, the principal amount wouldn’t be touched as only the income generated is used for project, program and capital funding.

“The Aberdeen Health Foundation board will decide where the funds could best be used,” she said. “The board will meet in September to evaluate it and determine the needs of the health authority.”

Malcolm noted that while funding for the foundation varies from month to month, the funds gathered to date have allowed for spending of over $1 million this year.

“We’re notified when monies are set aside in estates or when people have come in outright with a donation. We support our hospital with funding in education and equipment to name a few.”

It’s not the first time that the Sobeys have been generous supporters of the foundation. In 1990, a capital fundraising campaign was launched with a $1 million donation from the Frank & Irene Sobey Memorial Trust. According to Doucet, the trust has contributed $6.4 million to the foundation since 1991. With the $8 million announced, the total given from the Sobey Foundation to the health foundation totals $15.4 million.

“The work of the Aberdeen Health Foundation is fundamental to the vitality of our community here in Pictou County,” said Frank Sobey, Chair of the Sobey Foundation. “The Sobey Foundation has made this investment to ensure that the Foundation and the hospital have the capacity to continue to provide this essential support in the community where we live and work.”

Malcolm noted that while the board would decide how to best distribute the money, the foundation was very lucky to have a good relationship with the hospital.

“Often we’ll go to them and say we need ideas and they’ll submit them to us and we’ll review them. The emerging needs for healthcare are crucial and equipment is expensive. You can’t even imagine what [$8 million] can do.”

Because of the generous support of Pictou County residents though donations, memorials and estate planning, the foundation boasts a generous endowment without needed public fundraising campaigns. The largest single donation previous to the Sobey Foundation’s $8 million came from Ned White, who gave $1.8 million in 1998.

“On behalf of all those from Pictou County who will benefit from this gift, I would like to personally thank the trustees of the Sobey Foundation for their extraordinary expression of support to our Foundation,” said Green.